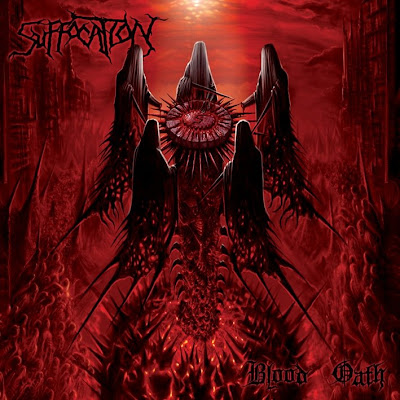 This is the 3rd record since SUFFOCATION have returned. It is the best of them and the one that the hardcore fans have been waiting for since the mid-90's. As a matter of fact, the level of intensity with which "Blood Oath" was crafted is such, that it sounds like merely one year has passed since the release of "Pierced From Within".

This does not mean that SUFFOCATION are one of those pathetic old bands who returned, tried out something new and then when they saw it didnt work as expected, rolled back to their older popular style... Yes, they play as intensely as in "Pierced From Within". Yes, this is better than "Souls To Deny" and "Suffocation". Yes, as Mike Smith admitted to a discussion we had together for a Metal Hammer feature, they've held back and kind of compromised in the previous two records. Now they are back in full force and they want nothing less than total domination and mass recognition. If things dont work out as they want, they will quit at their peak.

Right. What's the deal here? The foundation of "Blood Oath" is "Pierced From Within"-like complex brutality. Their playing is challenging and stimulating. You definitely should not expect from those guys to suck their own dick with some gratuitous musical onanism.

On top of that there's some novelties for the SUFFOCATION style, which are definitely welcome. There's melodies on the guitars, technical parts that could be labeled as "prog" by some and most important of all: atmosphere. I realize this might sound scary to some, but there's not any reason for that. SUFFOCATION are still one helluva brutal band. The only twist is that not only they are bestial but also cerebral. I definitely like that! Tracks like "Dismal Dream" and "Provoking The Disturbed" are instant underground hits. The re-recording of "Marital Decimation" (erroneously marked as "Martial Decimation" on the tracklistings) from "Breeding The Spawn", their record with the weakest production, is a charm.

The only thing I DON'T like is John Ziggs' cover artwork that is pretty much mediocre. This is the way things have to be: a classic SUFFOCATION album must have cover artwork designed by Dan Seagrave! Period. It's just like that: we, the fans, tend to associate bands with some excellent covers that wrapped some of their finest moments. Truth is that most of them don't look back. But we can still complain! You want some examples? All right.

- SUFFOCATION "Effigy Of The FOrgotten" and "Breeding The Spawn"
- BOLT THROWER "Realm Of Chaos" and "Warmaster"
- METALLICA "Ride The Lightning" and "Master Of Puppets"
- etc.. etc...

Whatever. Another thing for us fans is that "Blood Oath" sounding so good, we cannot but wonder how it would be like with Doug Cerrito back on the guitars. Maybe one day we will find out! Until then, grabbing this album is a no-brainer. The way SUFFOCATION are focused on rythm and atmosphere is irresistible.