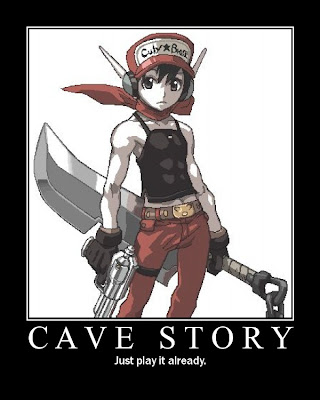 If you're into gaming you must have heard of CAVE STORY (DOUKUTSU MONOGATARI) by now. It's a great japanese platformer/RPG developped initially on the PC circa 2004 and distributed for free! It's in the veins of the early 2D installments of the Metroid, Ninja Gaiden, Mega Man, The Legend of Zelda, and Castlevania series. It is an important influence for other contemporary indie games, such as the wonderful Braid.

It was met with such public and critical acclaim that it's been ported since to most popular platforms: Mac OS X, AMIGA OS 4, Linux, PSP, GP2, original Xbox & even adapted for the Texas Instruments TI-83/84 Plus scientific calculators! All those versions as freeware.

The Wii (Wiiware) and Nintendo DS (DSiware) ports are commercial versions but most will agree that the author, Daisuke Amaya (aka Studio Pixel), deserves some cash at the end of the day...

The inconvenience of playing the Windows version is that is configured by default to be playable on the keyboard. When I was younger I actually played action games on the keyboard, but not anymore, it is pure masochism! If you want to play with a gamepad, you'll have to configure it by running DoConfig.exe. You must click on "Use Gamepad". Underneath you have a matrix which represents the button maps. You must basically try to figure out which action corresponds to which button or trigger on your controller by trial & error: extremely user unfriendly! Alternatively you can use one of those utilities who map the keyboard keys to your gamepad but I did not want to bother. 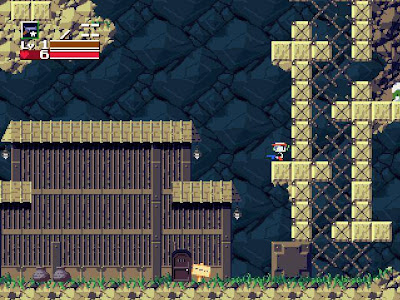 Anyway, ideally I wanted to play Cave Story with my gamer's pride: the X-arcade dual tankstick. No fuckin'way! The beast being programmable, I will try one day to map the keys but maybe not: alternatively I can upload the game to one of my two original Xboxes and play it with the tankstick after hooking it up using the Xbox adapter (I have the old, standalone version but nowadays you can purchase the 2in1: PS3 + Xbox adapter).

Since I'm not playing much on the PC, the other solution was a wired Xbox 360 controller. Luckily there is a comprehensive mapping guide in configuring it, actually posted on an excellent Linux blog, Helpful Linux Tidbits! Eventhough it's been written for the Linux version, the same mapping applies for the Windoze version. You will find it here, complete with pictures and everything.

If you manage to do the mapping for other controllers/gamepads, please let us know! Until then, if you're caught by gadget consumerism you should know that a 3D version of Cave Story is being prepped for the Nintendo 3DS and will be available on the 9th of August!