THE HOWLING WIND "Into The Cryosphere" review 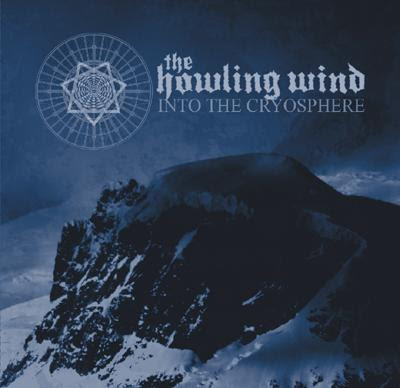 Me and some other devotees have been expecting this album since 2006, the year when has been released the swan song of Thralldom, “A Shaman Steering The Vessel Of Vastness”. After their break up, guru Ryan Lipynsky (Unearthly Trance, Villains) has formed The Howling Wind with a similar line-up, ie. him on guitars/bass/vocals/noises plus a drummer. In this particular case, another cult figure of the underground has joined forces: Τim Call from Parasitic Records and Alderbaran. “Into The Cryosphere” is such a pleasant surprise because the band’s debut “Pestilence And Peril” was good but not exceptional.

The Howling Wind are playing the exact kind of music and of black metal that I want to hear, and with “Into The Cryosphere” they are imposing themselves amongst the very best of ALL TIME. Lipynsky has conceived this album as a primeval voyage in , not from a banal Νational Geographic-like perspective, but from the mystic/symbolic side of things.

The result chills the soul as music has rarely achieved. I believe that quite a few of the older black metal fans have to be submerged in such a way since the era of the early Dark Throne albums. “Into The Cryosphere” has the frozen aura of the familiar/classic, a part of it being based upon the aforementionned norwegians, but also upon Bathory, some particular Swiss and Autopsy. Tracks like “Teeth Of Frost”, give us hints of early Unearthly Trance, which make us hope for their return back to the roots.

Familiar, yet alien. Scattered ambient/noise invocations constitute an important part of the arsenal. The atmosphere of the album is inhuman, introvert, minimal and majestic. Its listening cuts you down instantly. Your wounds will remind you of riffs such as the sublime grandeur of instrumental number “Impossible Eternity”, the awesome thrash-iness of “A Dead Galaxy Mirrored In An Ice Mirage”, and the guitar solos-curses of “Ice Cracking In The Abyss” and “Will Is The Only Fire Under An Avalanche”.

Like you must have understood by the songtitles alone, the album concept leads into deep waters – the lyrics will be studied thorougly by the more perseverant. The artwork is austere but fuctional, while the logo has been designed by the allies of the band, our very own visionaries Viral Graphics.