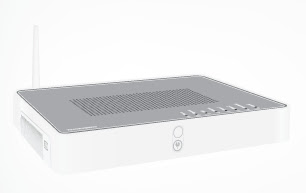 UPDATE: Thelink for the v7.4.4.7 being broken I have uploaded the firmware here. Enjoy!
The THOMSON/ALCATEL TG585v7 is a fairly popular modem. Thomson's Speedtouch series modems (TG585 is a Speedtouch, eventhough not mentionned anymore as such) have the reputation of being able to synchronize in conditions that others don't. The copper lines of the local telecommunications provider being crap, I chose it as a reasonable replacement to an apparently dead Speedtouch 530, who was going through an infinite restart loop...
When I first opened the box, it sure looked like a nice piece of kit... The web interface menu was pretty slick too. My trouble began as soon as I tried to play CALL OF DUTY 4: MODERN WARFARE on the XBOX LIVE. I couldn't join the lobbies created by most of my friends, getting the infamous "Unable to connect to host" error message. And you know what that means... That there's a NAT problem!
I stayed calm and started the troubleshooting. IT support is what I do for a living, anyway. I've been through the basic NAT checklist, check out what M$ has to say via article#908880.

Something was going awfully wrong. At this moment I started having strong suspicions that the firmware was broken. A normal reaction would be to look on the web interface for an "Upgrade firmware" task or option. There is none. Thomson doesn't have a good reputation for providing firmware support for any of its modem routers. As a matter of fact, if you want to upgrade or downgrade it, you will have to search through the forums in order to locate the firmware that you need in some improbable location. And guess what? Since the web interface doesn't offer an Upgrade facility, you'll also need a wizard!

The modem was shipped with version 8.2.1.5. The days when I was investigating the problem, a new firmware version got unofficially distributed, v8.2.3.7. Eventhough most people in the forums were using 7.4.4.1 which had the reputation of being very stable, I decided to give the brand new version a try.

v8.2.3.7's origin was unidentified, and on the web interface's background there's was written "Demo Premium". Oh well, why not? The funny behaviour with the broken external IP handling is fixed in this one. My COD4 @ XBL problems were not! I still got the "Unable to connect to host" error message.

Two people from my XBL friend list had the same modem and they had no such issues, plus I could connect to them without problem, while I had trouble with most of the other players. They both had downgraded to version 7.4.4.1. One of them has even reported to me that his internet connection speed has peaked after the downgrade. Wow. As far as the XBL goes, one of them had to assign to the Xbox the public IP, the other had just to assign it to XBL through the "Game & Application Sharing" page.

I'm a COD4 addict and this situation was driving me crazy! As a last resort , I downgraded to version 7.4.4.1. In the beginning the wizard couldn't find the modem, but then I disabled my antivirus and it did. This version is specific to the UK, so some minor extra effort is required during initial configuration, but no big deal. I configured the Xbox through the "Game & Application Sharing" page, and then I tried inviting to a COD4 lobby a friend with which it was impossible to party up until then. It worked like a charm...

The TG585v7 is a good and stable modem router, but there are things broken between the old 7.* firmware releases and the new 8.* ones . Go figure! Thomson/Alcatel don't give a fuck about gamers? Totally! otherwise, the forums wouldn't be full of people trying to figure out what's wrong. In any case, firmware downgrade isn't something the average user would have to care about...

If you want to downgrade your TG585v7, grab the firmware and the wizard here: http://www.thomson.net/GlobalChinese/broadband-uk/Drivers-Firmwares/Pages/default.aspx . ADSL over ISDN and ADSL over PSTN flavours share the same firmware, so don't worry about bricking your modem by up/downgrading with the wrong one. I have the ADSL over ISDN version btw.

Ok, I hope that I may have helped a few desperate XBL gamers. If you happen to be a TG585v7 user, please share with us your positive or negative experience...

The Download link for the 7.4.4.1 firmware and the wizard does not work, by that i mean it takes you to the wrong site.(Im assuming hte original site was closed down or something). Please repost it somewhere outs. Would be very helpfull.

this is the same guy, if you do repost or give any advice, please email me at s117spatan@hotmail.com

Thank you very much for doing all the legwork. I am currently on 7.4.20.3 and was looking to increase my wireless speed by upgrading but I won't bother now!

cant believe what a piece of rubbish i have. OK for my desktops and laptops but as far as my xbox is concerned....

Someone Pissed Off with ACTIVISON said...

I don't think that installing a custom firmware will void your warranty, but that might make harder to get support from your router's provider help desk in case of a problem.

The console versions of the Call Of Duty series are notorious for their bad, obsolete netcode. Black Ops is amongst the worst and PS3 owners are in rage.

So basically you're in a world of pain. I would suggest trying other multiplayer F.P.S. titles and check if you have trouble with them too before deciding to fix your router (especially if you don't feel technically confident).

Try first games with dedicated servers such as Killzone 2/3 and Battlefield: Bad Company 2. If you still want to try another game with a host-based network scheme, check out Crysis 2, it has better netcode that the COD/MW series. Fore more info about Crysis 2, as well as dedicated servers vs. hosts, check this post.