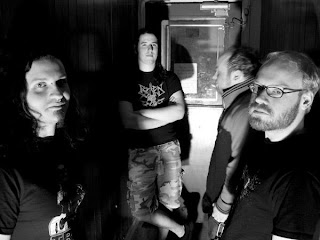 SWARM OF THE LOTUS

His Majesty At The Swarm

Heaviness and intensity.These are the 2 words that suit for a new striking band,Swarm of the Lotus.With a production and a sound over the top the quartet from Baltimore managed to stretch the limits of heavy music a little further.Pete,their guitarist and singer,explains us how a new band can be an extremely killing machine.

• first of all congratulations for the great album!as this is the first time you
communicate with Greece tell us first how the whole thing started.
PETE: We have been a band since the Fall of 1998. We started recording "When
White Becomes Black" in February of 2002. It took until the Fall of 2003 to
release it. We are very proud of it and happy with the response it is getting.
We look forward to the future. Thank you for the kind words.

• the whole album is supported by an ultimate heavy sound and intensity.how did
you manage to create this astonishing sound?
PETE: Well, we owe the way it comes across on record to Jon Smulyan, our
recording engineer for this record. That was all him, he's the man. He has a
great ear and knows his shit. So, cheers to him.

• when white becomes black has an uncommon chemistry of sounds and
influences(you can hear from Botch to noise stuff mixed with an unexampled
way).can you name some of them.
PETE: There is a wide array of influences that we have. Botch would be one of
them for sure, I love them. I love all kinds of heavy music. Neurosis,
Mastodon, Converge, Burnt By The Sun, these are all some of my favorite heavy
bands and there are so many more too!!!!!!!!

• some songs reminded me a touch of Neurosis,Mastodon and even more sludge/doom paths such as Isis and Meatjack.do you believe that you are somewhere betweenall those or just Swarm Of The Lotus are trying to overstep the limits of heavy music?
PETE: Well, for sure we are trying our best to be doing our own thing. Trying
to be original as possible. But, you are always going to have influences. It's
just how you are inspired by those influences that makes a difference.

• i have to make a comment on the vocals and the drums.the vocals are totally
crazy and away from the classic Neurosis style(whole lotta screaming) and the
drums have a great production where someone can listen to the drum sounding likeslap!your comments?
PETE: Thank you very much. The vocals are a bit intense yes. For the next
one, I plan to do a alot of different things with them. Still as intense but
just different. The vocals on this album are just all about being raw, etc.
The drums have this larger than life sound. Jon Smulyan strikes again. I love
the drum sound he was able to come up with, but once again for the next record,
they too will be different.

• can you tell us about the lyrics?i think that SOTL lyrics are really emotional
and deep.
PETE: I try to leave the lyrics as open to personal interpretation as I can.
Try to have everybody read them and take away from them what they will. A lot
of the stuff speaks from a personal place and then a lot of it doesn't. In any
case, I try to have the lyrics really mean something, instead of just a bunch of
words thrown together.

• from the ultimate heavy music am i wrong to perdict that Swarm of the Lotus
are a live killing machine?how did the audience react when you play?
PETE: We love to kill people, hahahahahahahahahaha. We try to put on the best
show we can everytime we play but it really all depends on the crowd. Not even
the crowd size really, just the type of crowd. We totally feed off of the
energy created by the people watching us. We could go nuts for 2 people if
those 2 people were digging it, etc. Overall the reaction by all the crowds we
have played in front of has been very positive and consequently our performances
have on the whole, been pretty damn good.

• when you play live what interest you:to play heavy and loud striking the
chords clumsily or playing with great attention?
PETE: Depends. I like to do both actually. Sometimes, I concentrate super
hard on what I am playing to better articulate the song and sometimes I love
just losing my shit and have emotion take over and even if I'm not playing the
part right, it doesn't matter because the vibe is just so intense and
over-the-top.

• which is the impression of the Press for your debut?
PETE: All the press we have received has been amazing. I couldn't be happier.
I mean, some people criticize it in negative ways, but that is all well and good
and to be expected. But on the whole, most people have dug for one reason or
another and have said some really great things. I am totally blown away and
feel very fortunate. Cheers to all of you out there and thanks!!!!!!

• you have played with great bands bands such as Burnt By The Sun,Converge,Mastodon,Uphill Battle among others.do you believe that these bands as well as you are the leaders of a new international scene which is supportedby a lot of broad minded people and music that is just progressive and brutal?
PETE: I think the scene now is filled with a lot of people that are more open
to metal bands trying different things and such. Before, everybody used to be
so religious in what they would like. Like, "I can only listen to stuff that
sounds like this..." or whatever and that attitude just sucks because it limits
your tastes. You still have people like that but not as much, I really like a
lot of the heavy music that is coming out of the scene right now. Metal is
coming back in a big fucking way. Horns up baby!!

• your debut has in some songs some more post sounds that calm down the
intensity before it gets stronger.does that help your songs breathe and perform
one more cerebral air?
PETE: Yeah, we have a lot of parts like that, that break of the song, change
the dynamic a little bit, calm it down, speed it up, slow it down, whatever. We
are all about creating a "song" and not just parts thrown together or songs that
have to be 100% crushing the entire time. We like to throw a lot of different
emotion into a song and have it rise and fall, build and collapse, etc.

• explain us how a Swarm of the Lotus song is taking form.
PETE: Usually somebody will write a song and bring it to practice and we work
on the drums first then bring the other pieces of the band into the song one by
one. The vocals are always the last thing to come into play.

• i read these days at the internet that you are having extended tours andshows.how much do you believe that live can help you become bigger and stronger?
PETE: Live is where it's at baby. You can only get bigger and stronger by
playing out live as much as possible. And we have made that our goal. To tour
the world as much as possible. We just did a 6 week tour this past spring. We
are doing another 4 week tour this fall(Oct 1-Oct 30). After that we plan to
record the next album and then tour again. We plan on hitting Europe next year
in the Fall, so stay tuned and watch out fuckers!!!!!!!!!!! Here we
come!!!!!!!!!!

• is there an offering from a big label to release your next step?how are things
with at a loss records?
PETE: There are some negotiations going on right now with a different label.
I'm not at liberty to officially announce anything yet, but it's all very
exciting. Everything with At A Loss Records has been amazing, I love Josh, he
is a friend and a great supporter of music. He treats all his bands great and
works hard for them. I feel fortunate to be working with him.

• the last words are for you.we await to see you live so fucking soon!
PETE: Check out the website: www.swarmofthelotus.com for all news, live
dates, etc!!!!! and pick up our 7" Record featuring 3 exclusive tracks from
Reptilian Records, out now!!!!!! www.reptilianrecords.com!!!!! Stay
metal!!!!!!!!!!!!

Interaction by Thanos Mantas 2004
Posted by Raoul Argos at 13:49